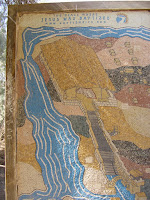 This mosaic mural depicts the site where it is believed that Jesus was baptized by John the Baptist. The bottom part of the photo shows four columns with an arch overhead. It is believed the baptism took place at this location. If you click on the photo it will zoom to show more detail. The course of the river changed due to an earthquake and does not now flow in this area. Diggings located the four pillars and they are shown in the next photo. 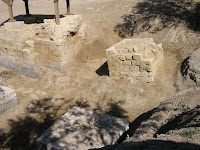 The River Jordan flowed from top to bottom in this photo. 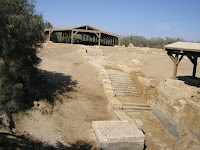 A building has been erected to protect some of the many artifacts discovered near the baptismal site. 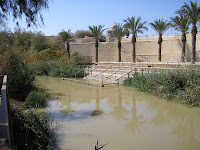 Observation decks are located on each side of the Jordan River where tourists can get close to the river. This view shows the one on the Israeli side. The site had been guarded by military until 1994 and no one was permitted in this area. There is lots of building taking place there now as tourists are beginning to flock to the site. 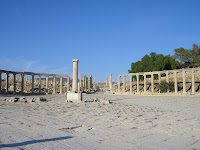 Ruins from the City of Gerasa as it was called in the Bible are found in current day Jerash, a city of 400,000 about 45 minutes north of Amman. The city thrived from 100 A.D. until after falling to the Ottoman Empire in 1200's. 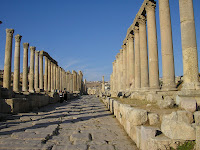 The ruins at Jerash are some of the largest in the world. There were many outdoor amphitheaters, coliseums, temples and market places there. It was a major shopping and trade center between Damascus and Amman.

The River Jordan seperates Jordan and Israel. During the times of conflict
between the two countries it was guarded by the military and much of the
land was mined with explosives. Since 1994 the region has been under
study to locate historical sites. 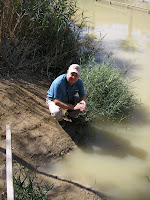 I am shown here at the Jordan River near the site where Jesus was baptized by John the Baptist. 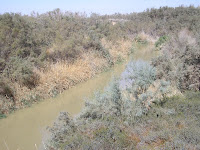 The Jordan River is believed to have changed course since the time of the baptism due to an earthquake years ago. 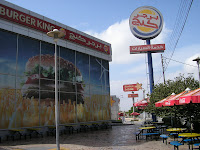 Amman is fairly well westernized and has many fast food places such as Burger King, Hardees, and next door was a Popeyes Chicken. 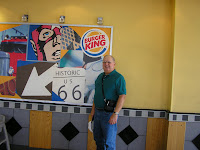 It was interesting to see a wall mural featuring Historic U.S. 66 painted on the wall inside Burger King. 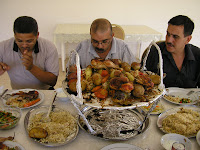 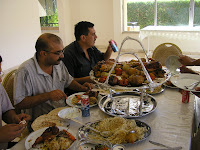 One evening at the farm we had a real feast featuring lots of vegetables cooked with chicken in a 55 gallon barrel buried in the soil where hot coals were left from burning some limbs and the coals were left to cook the chicken and vegetables for two hours. It was really tasty and enjoyed by all. The fellows who did the cooking were all from Egypt. 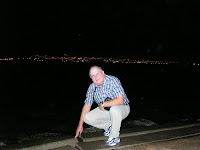 This photo was taken at Aqaba on the Red Sea. I had an opportunity to go there with my host to tour the city and to eat fresh fish. It is located about an hour away from the farm.
Posted by dairyspecialistinrussia at 3:26 PM