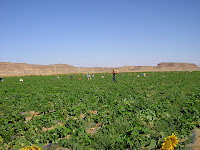 Green beans are being picked by hand. The long growing season allows for many pickings over a long period of time. Once a crop is finished successive plantings are made in the same field. 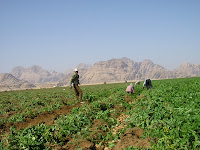 Potatoes were being harvested while I was on assignment in October. Due to the shortage of potatoes in Europe from drought conditions prices were very high for immature potatoes. Because the skins were so tender, it was necessary to pull the plants by hand and pick up the potatoes and place them in boxes for shipment to markets. Normally machines are used to harvest the potatoes after reaching full maturity. 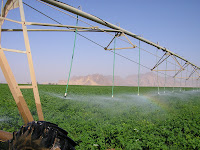 and harvesting can occur as early as 85 days after planting. Irrigation is done with center pivots systems. 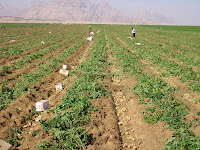 Workers would pull up to two or three rows of plants with the potatoes then removed by hand and placed between the rows to dry in the sunshine for a few hours before being placed in boxes holding 7 kilograms (15.4 pounds) per box. 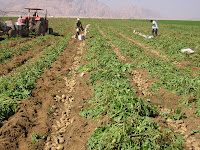 There was a shortage of workers for harvesting potatoes while I was there. It really takes a strong back to handle the work as the plants were heavy with moisture and with high yield. Of course the sun was providing intense heat! 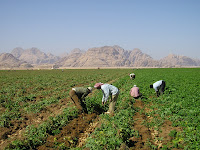 The view of the desert with the magnificent pink rock formations is a sight to behold! It was in this region where the movie "Lawrence of Arabia" was filmed. 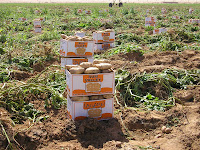 These quality potatoes are ready for shipment. They are not washed nor handled anymore because of the tender skins. I was told the sand would dry and fall off during transportation leaving a shiny clean potato for purchase at the market. Many other vegetables such as onions and tomatoes, squash are also grown here. Fruit crops include grapes, apricots. figs, peaches, pears, cherries and more. When I was there in June many were ripening at that time--Yummy!
Posted by dairyspecialistinrussia at 2:57 PM