Corn silage is being grown in the desert in southern Jordan using center pivots to supply water from an aquifer that also supplies water for fruit and vegetable production. Pipelines are now being installed to pump water from this area into Amman some 330 kilometers north. The growing season is long starting in early March and extending until late November. It is possible for two crops of corn silage to be grown on the same land in one year. 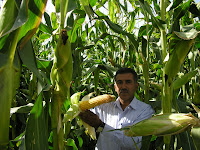 At the present time long maturity varieties are grown in the region, however it is recommended that newer genetics that mature up to one month earlier will use less water without sacrificing yield. 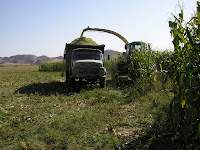 The corn is harvested when the dry matter of the total plant is near 33 percent and is chopped with modern equipment. The silage is trucked a short distance to the horizontal silo where it is packed tightly and allowed to ferment rapidly to preserve high nutrient quality. 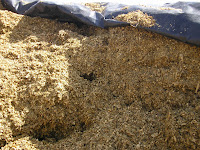 After the silage has fermented at least 45 days it is then removed from storage and is placed into a stationary baler where it is shaped into a large bale. 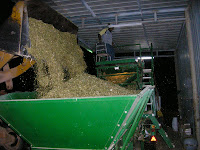 Silage will spoil quickly if allowed to remain in contact with air, so the baling operation is done rapidly. 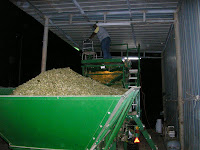 An operator contols the hydraulic pressure applied to the bale as it is being formed. Once it reaches desired size a net wrap coveres the bale. 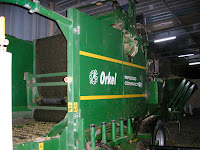 The baler is stationary and powered by electricity. 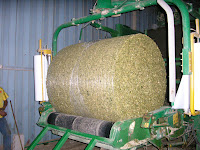 Once the net wrapped bale moves onto the finishing platform a plastic film is stretched over the bale as it is rotated in position allowing at least two and a half wraps to cover the bale insuring a tight wrap which preserves the bale for up to one year. 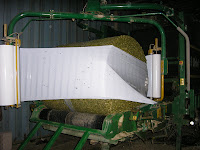 Net wrapping is being applied in this photo. 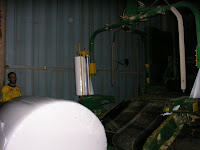 onto a sand pad where it in then picked up for transportation to the bale storage yard. Each bales weighs up to one tonne (2240 pounds).


The bale is carefully picked up and transported to storage. 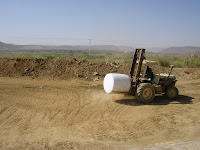 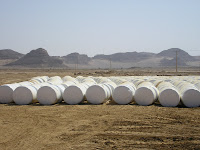 delivery to northern Jordan where it is used in rations for dairy cows.


Posted by dairyspecialistinrussia at 2:22 PM