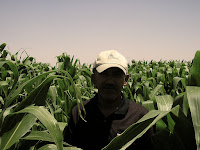 Corn was being grown for silage. In this photo the forage department consultant is shown in a field planted on April 10. It was 140 day maturity corn and at least 3 weeks before it would pollinate. It had good color with high plant density and was being grown in the desert with a center pivot system designed in Nebraska. 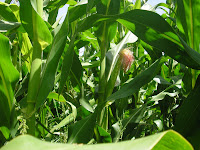 This corn was planted on March 20 and was starting to pollinate. The photo was taken at my eye level and the plants were at least three feet taller than my eye level. 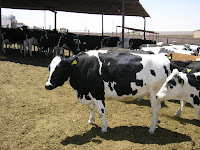 H0lstein heifers grown for replacement were well grown with expected calving at ages between 24 and 27 months on this 1000 cow dairy near Amman. They were getting corn silage and alfalfa hay from the agricultural company that I worked with located about 200 miles south of Amman in the region of Wadi Rum near the border of Egypt and Saudi Arabia. 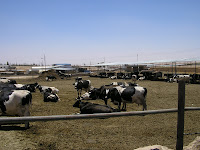 The milking herd was milking quite well and seemed to tolerate the heat well. Of course the humidity was less than 15 percent most of the time. Daytime temperatures would be around 90 degrees and nights would cool to under 65 degrees with a breeze, so cows did cool off each day. They were in a dry lot with shades. 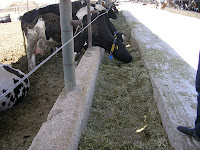 Fresh cows got lots of alfalfa hay with limited amounts of concentrates. They were starting off well with few problems and many were milking well over 100 pounds milk per day. 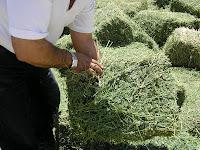 The irrigated alfalfa hay had very fine stems with excellent leaf retention. Baling was done from 4:00 to 7:00 a.m. each day when there was some dew to keep leaves from shattering. The hay was being sold for near 350 dollars per U. S. ton. 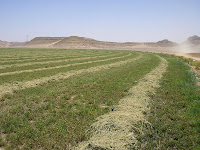 At Wadi Rum the alfalfa was being grown under center pivot and was being watered continuously with about 3 applications per day. The pivots had drop down nozzles to minimize transpiration losses. The stands were being cut about every 28 days with 8 ot 9 cuttings per year. They were taking the third cuttings in mid-June when I was there.

Posted by dairyspecialistinrussia at 1:36 PM