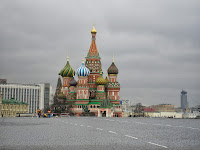 St. Basil's Cathedral is one of the most colorful and most photographed churches in Russia. It is located in the southeast corner of Red Square and was built in the mid-1500's when Ivan the Fourth (Ivan the Terrible) was
Tsar. 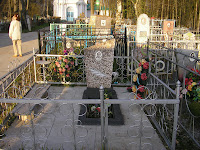 Cemeteries in Russia appear to be filled with much ornamentation. Basically the burial plot has a seat with a table for the bereaved to be seated and drink tea and to mourn. Many of the stones have photos etched into them. Both live and artificial flower arrangements adorn the gravesite. 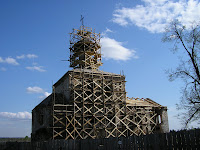 The scaffolding surrounding the church in the photo is there for restoration. The church was likely bombed by communists to prevent citizens from worshipping there during Soviet times. Volunteers come from all over the world to assist with restoring the many damaged churches. 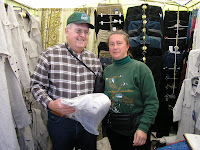 Many of the markets are open air temporary markets. When one wishes to try on a garment the vendor supplies a curtain for you to stand behind. 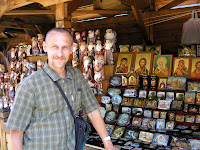 This artist is with his stand of lacquered boxes. They show excellent detailed art work with various scenes and then are covered with finishes that make them quite beautiful. 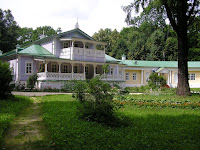 This house is where Ivan Turgenev wrote many of his world classic novels describing life in Russian villages during the middle 1800's. It is now a museum along with the estate with virgin timber. I was able to tour it in July, 2008 when I stayed at Chern, south of Moscow. 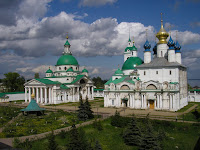 The twin churches of St. Jacob and St. Dimitri are located on Lake Nero, in Rostov, another of the Golden Ring Cities that attracts many tourists. They were used to store military equipment during Soviet times and are now being restored. 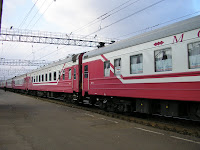 Whenever I leave Moscow to go to a farm assignement I go by train. Sometimes it is an overnight train lasting about 12 hours and more recently it has been about 4 to 5 hours and much closer to Moscow. The trains are not air conditioned and are rather hot in summertime. When I go for the longer trips I have a sleeper car and meals are provided. 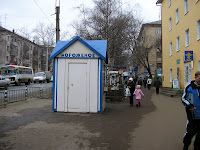 Russians love to eat ice cream! This is an ice cream kiosk near the hotel where I stayed. There were three such kiosks at the intersection. All the ice cream cones are pre-filled at the plant and sealed in cellophane. It is tasty! 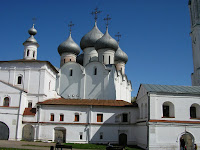 This photo shows part of the Vologda Kremlin located at Vologda on the Volga River. It was a monastery and was the seat of government in earlier times. It has many museums located there today. Vologda is known for its fine lace production made from flax grown in the region. 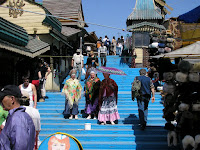 This is a scene at the open air flea market in Moscow with three women dressed in native costume. These women sing there everyday the market is open. Artists bring their work there to sell mainly to tourists. The vendors love to haggle on price and it can be entertaining. 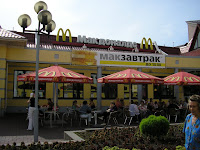 When one gets hungry for American food in Russia. No fear! McDonalds is located in all the larger cities. Usually there is a long line. The food is very similar to that found in America and the prices are too, which makes it quite high priced for Russians. 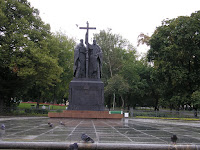 This monument shows the two monks who developed the Cyrillic alphabet for the Russian language. The alphabet has 32 letters with each having its own sound. Many letters look similar to the English letters but may have totally differing sounds. There is no "S" in Cyrillic, but rather the letter "C" has the sound of "S". The letter "P" is sounded as "R". It takes some getting used to, but I can read quite a bit of Russian now. 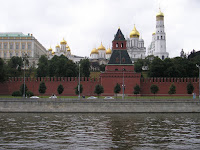 This is the eastern side of the Kremlin as it is seen from the Moscow River in downtown Moscow. There are many churches located in the Kremlin. Red Square is located within the Kremlin and has two churches on its site. The walls surround it and have many sentry ports where military guard and protect it. 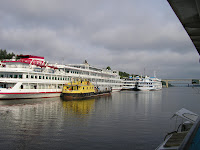 The Volga River starts near Tver, northwest of Moscow, and runs to the Black Sea. Many tour ships provide tours for visitors around the world. During summer there are lots of people touring the Golden Ring Cities which were founded over 1000 years ago. Many monasteries are found in the Golden Ring Cities and were important in bringing christianity to inland Russia as trade developed. 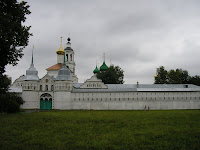 The Tolga Monastery is located near Yaroslavl and sits on the banks of the Volga. It is surrounded by walls with sentry ports for protection to defend against invaders. Most of the gold and valuables were stored in the monasteries in early times. These buildings were used as a prison and tuberculosis sanitarium during Soviet times. They are now being restored by nuns.

This is a scene inside the Tolga Monastery showing a meditation chapel, some of the beatifully kept grounds and churches. 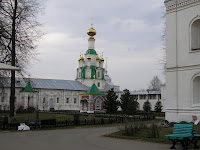 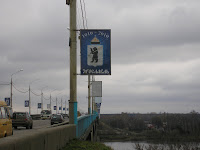 This banner is on the bridge over the Volga River at Yaroslavl and depicts the 1000 year anniversary of its founding in the year 1010. The city is preparing for lots of tourists during the celebration and has much renovation going on. There are many colleges and universities located in Yaroslavl. I have stayed there several times as it is near the center of all the dairy industry. There are many services available for dairymen that are located in Yaroslavl. As word gets out that I have been to a dairy farm and made new recommendations the sales staff carry this information to other farms. When I was there in April, 2008 I trained at least 18 different staff from industry in addition to the farm staff. 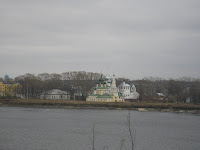 The city of Uglich, founded in 937 A.D., sits on the Volga River and is another of the Golden Ring Cities. Several churches are seen in the back ground along the river. This was the site where Dmitri, the young son of Tsar Ivan the Fourth (Ivan the Terrible), was found dead from a dagger. His body was taken by foot to Moscow for burial (about 150 miles) and each time a drop of his blood touched the soil a new church was built. More than 60 churches were built as a result between Uglich and Moscow. 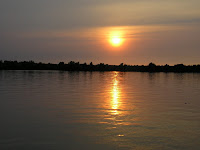 Sunset on the Volga in July was a particularly beautiful sight and caught my eye as we were winding down a long day.

These photos represent sites away from dairy farms where I was able to tour museums, churches, monasteries, markets and monuments.
Posted by dairyspecialistinrussia at 1:25 PM