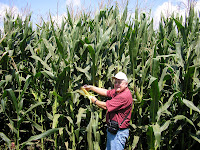 Corn has been grown in Lebanon only since 2000. The seasons are similar to much of the Midwest in the higher elevations between the two mountain ranges that run parallel to the Sea. Soils are largely a mixture of sandy, loam and clay with a high pH requiring no limestone applications. Most of the corn is harvested for silage and used to feed ruminant animals in Lebanon and to export to neighboring Jordan. 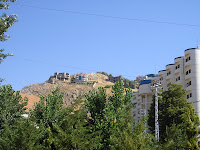 Houses in Zahle' were built high on the mountain ranges with fantastic views of Bekaa Valley. Most were built of stone or concrete. Many were multiple levels and multi-family as well. The sky was clear and the air was light in this region. It was hazy near the Mediterranean Sea because of the high humidity, but in the Valley it was clear. 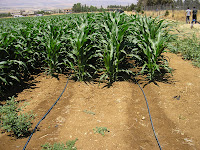 Corn grown in the no-till plots was being irrigated with drip irrigation methods. Otherwise corn was irrigated by either sprinkler or furrow methods. The drip system is much more efficient than other methods, but is labor intensive.

A no-till planting field day was held at the Agricultural Experiement Station of American University of Beirut where farmers learned about no-till planting equipment and saw fields of corn being grown. 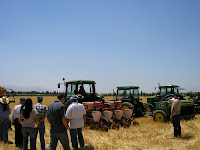 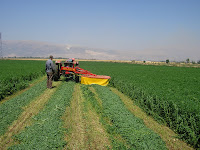 Alalfa was grown for hay. This photo was taken in the Bekaa Valley east of Beirut near the city of Zahle' between the western mountain range and eastern mountain range that borders Syria. The atmosphere had lower humidity and it was cooler in the valley than near the Mediterranean Sea. 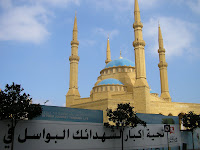 The message on a fence near the Mosque at Martyr's Square had the following words, "Leave no stone unturned as you journey through life" in English as well as in Arabic. Not bad advice for an adventurer! 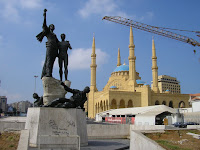 This photo is taken at Martyr's Square in Beirut. It represents the sacrifices of the many who have fought to preserve freedoms in Lebanon. In the background is the Mosque built to commemorate the leaders who have given their lives as they served their country.
Posted by dairyspecialistinrussia at 12:57 PM