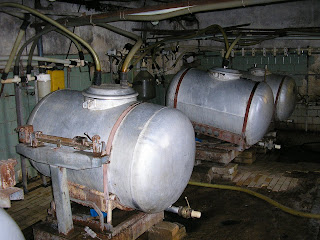 During Soviet times dairy farm workers were paid based upon the amount of milk produced or the amount of body weight gain produced in calves. This photo shows the collection tanks mounted on platform scales to weigh milk which has been transported via pipeline from the cows. It is then co-mingled into a large stainless steel cooling tank prior to pickup and transported for processing.

Most cows are housed and tied in stalls with feed brought to them several times each day. In nearly all barns pipeline milkers are used, however some still carry milk to the tank by hand for cooling. Most cows have horns. 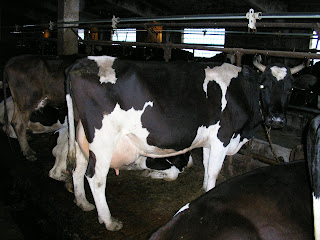 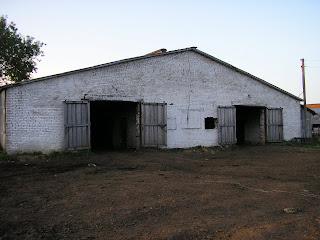 Most of the barns consist of four rows of cows and hold about 200 milking cows with 50 cows in each row. The barns are made of concrete and some have a metal roof 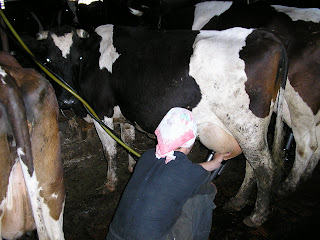 while others are concrete.


Women do most of the milking on Russian dairy farms. Each woman is responsible for about 50 cows, including dry cows. Upon completion of milking the milkmaids then care for newborn calves and feed calves until weaning. When cows go to pasture in summer they are grazed as one large herd and then each milkmaid sorts her herd out as they return to the barn for milking.

This photo shows a herd on pasture with a portable water tank and salt tank that is moved to follow the herd from one plot to another. Milk production is highest during summer as forage quality is quite good at that time. Most of the pastures consist of cool season grasses, like timothy and orchardgrass or brome grass mixed with white clover. 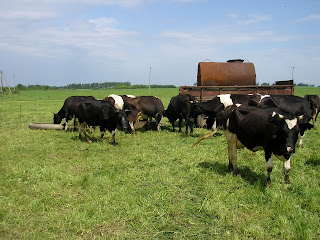 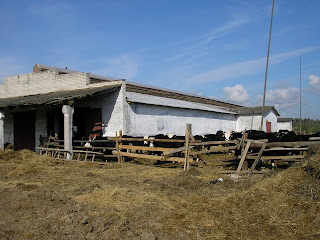 In winter time all cattle are housed inside. This barn houses heifers that are pregnant and they are allowed to go outside to eat hay from big bale feeders. The heifers also are fed a mixed feed with silage and small amounts of grains inside the barn. Heifers shown in this photo are Yaroslavl breed and have black hair coats with white faces and black around the eyes. They are hardy and mature slowly into deep bodied cows with lots of body capacity and strong feet and legs.

Most dairy farms are in varying stages of adopting new technology, such as free stall housing with center drive through feeding systems, like shown in the next photos. This technology makes labor much more efficient and allows cows to be handled in groups with less labor. 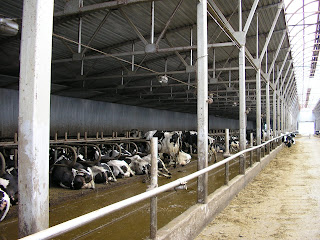 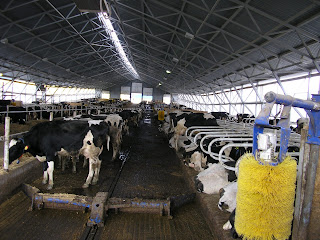 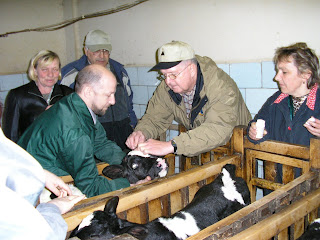 I have demonstrated use of dehorning paste in young calves to prevent horn growth on all of the farms that I have consulted. It is catching on rapidly and I now see many farms using dehorning paste. Whenever I started in 2006 none of the farms were using it. Suppliers now carry it in most regions of Russia. 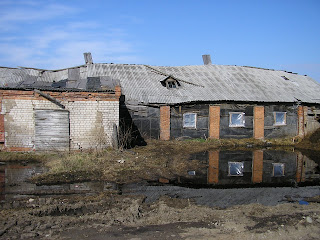 Many of the older concrete Soviet-style barns have had little repair and have significant structural problems, even though cattle are still housed in them. Barns like this one will be abandoned when new barns are built. In other cases older barns will be remodeled to accomodate replacement cattle. 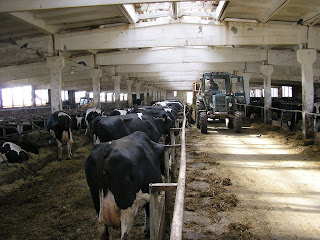 This older concrete barn was wide enough and tall enough to facilitate renovation into a free stall complex with drive thru feeding areas. Many of the Russian dairy cows are being crossbred with Holstein semen from Canada or the U.S. In some cases Holseins have been imported from Holland, Germany or Denmark when herds have been expanded.


This is a native bred herd of Yarolsavl cattle and do not produce large amounts of milk, except during summer when they are grazed. A herd like this would likely produce about 2500 liters of milk per cow per year, or 5500 punds of milk. 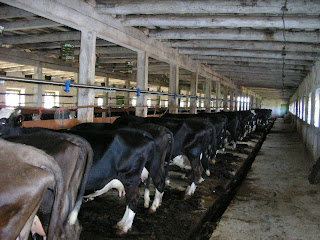 Attached are photos of dairy farms in Russia showing housing, feeding programs, milking techniques, storage of milk, and other general dairy farm photos taken when working on more than 17 dairy farms for up to a week or more, at each farm. These farms have ranged in size from over 400 cows up to 3000 milking cows. Many of the farms have multiple locations situated in small villages where cows are housed in tie stall barns.

Cows may or may not be allowed to graze during summer, from the end of May to late September. The old Russian style concrete barns are rapidly deteriorating, after years of little or no maintenance. Some are being remodeled into free stall facilities with drive through feed alleys. In other cases they are being abandoned altogether and new modern barns, similar to those in the U.S. are being built. All of the older facilities require large amounts of physical labor. Most of the milking and rearing chores is done by women.

Most of my work has been with those dairy farms that are in the process of expanding. All want to adopt new labor-saving technology and provide more comfort to the animals, increased milk production and greater labor eficiency. I work with a variety of issues, but mainly work with nutrition, feeding and management.

Typically, Russian cows have relatively poor quality forages due to late harvesting of silage and hay crops. In some of the better soils corn silage is grown. The growing season is much shorter than here. During summer time normal daylight hours are much longer than here due to being so far north. Corn grows rapidly whenever it has 16 to 18 hours of day light. Silage is stored in horizontal silos and may or may not be covered to preserve it.
Posted by dairyspecialistinrussia at 7:56 AM

Good day
Silage issue can be resolved, if go for bale silage import