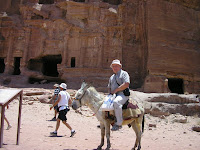 This was the "air conditioned Ferrari" that I rode when I got tuckered out from climbing steep paths and ledges to look at the sights of tombs, rooms and buildings in the park. 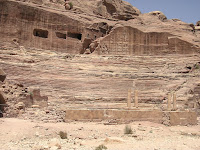 The amphitheatre was carved into the sandstone with seating for more than 3000 people. 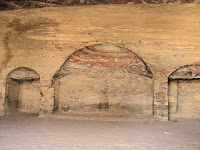 This is a photo of one of the rooms carved into the mountains. There were many such sights. 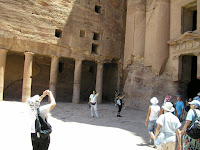 Another set of buildings with tombs carved into the walls. 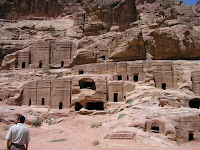 This settlement was built over several years and thrived nearly 2000 years ago. It had its own water canals for preservation of water from rain and supplied the population with water. It was destroyed by an earthquake after 1100 A. D. and was known as a lost city until rediscovered in the early 1800's. 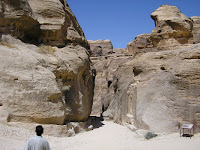 To enter the city you walk through the SIQ which is a steep walled walkway, about 3700 feet long, through the sandstone mountains with many of the cliffs up to 300 feet high. The pathway is fairly narrow, but a car can pass as well as horses pulling carriages, camels and donkeys. It is all down hill and quite breezy as the air flows through the tunnel. The challenge is climbing up the hill to leave!


The Treasury is a beautiful pink work of art carved into the sandstone. 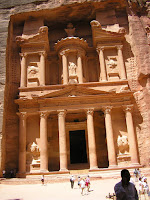 When you arrive early in the morning the sun is shining through the SIQ onto the building. It is believed that it was built by the Nabataeans as a tomb for the king Aretas III, probably during the first century B.C.

Posted by dairyspecialistinrussia at 12:49 PM